How Fitness Franchises have a Bright Future Post COVID-19

Fitness! A topic of discussion well adored by health fanatics. They say that the keys to good quality living are getting enough efficient sleep, adequate amount of healthy meal portions, a positive optimistic attitude towards life and constant exercise along with physical awareness. Everybody loves to take care of themselves don’t they? Everyone seek to constantly be better refined versions of themselves, they seek to progress, and some to flaunt off their success on achieving their goals. 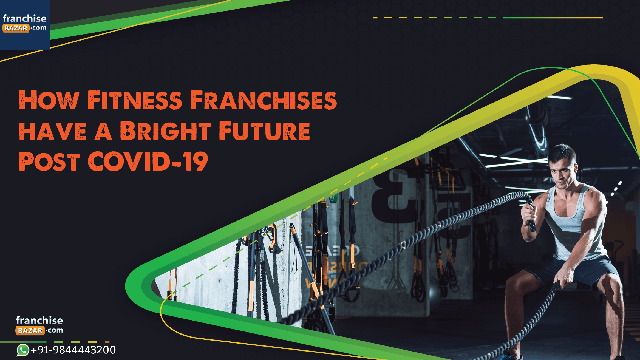 Being fit is a good thing, and encouraging others to imply such a practice in their lives is even better. It’s like this contagious chain of inspiring couch potatoes to man up and make a physical change that would make a huge difference in their lives.

Ever since the advent of this infamous virus (COVID-19), Fitness fanatics have been adversely impacted. Either some have lost motivation and have become couch potatoes, or some are lost on what future fitness goals they have to set, or some are still constant and focused, making the most out of the moment. Losing access to the gym has been among one of the major blows fitness freaks are still trying to process, varying their workout routines and using home workout equipments that may yield varying results has been a pretty frustrating experience for them.

Some may not even find the productive vibe in their homes, as homes give off a universal vibe of comfort and relaxation rather than focus and productivity. Some might have already given up and adopted that “I’ll do it later” attitude which is disappointing. However the case is not the same with all, but still we have witnessed a drop or a state of dormancy among such fitness enthusiasts. As one can’t be cluttered up in masses (ie Gym or a Fitness Centre), or to train in the presence of a professional, or just to have a good time working out with their friends, some lose interest inevitably.

While Fitness Franchise operations are not completely ceased, they still appear to function partially. Through their fitness apps, or by providing workout guidelines in the medium of videos at YouTube, and articles and blogs that provide invaluable information on how one could keep up, both with the times and with their fitness.

Franchises like Snap Fitness, Playmore and CultFit are seamlessly providing a vast number of fitness modules and sessions to their users, molded in a way in which they could adapt to their homely surroundings as their own personal gym. If that’s not enough to satisfy you, they also provide private sessions for those picky users personalized to perfection and to their satisfaction. However people seeking to access such features have to purchase a membership which ranges from the mid-high price range. While some find it worth the price, while others find it overpriced.

Quite a smart strategy that such Franchises have adopted to counter both the virus and laziness, while simultaneously generating a decent revenue from such. Something is better than nothing right? So in a way many health-fanatics while not completely, but a partially benefiting themselves from all this.

There are chances that all the couch potatoes that would come out of their homes during post pandemic period, would suddenly become aware of their physical stature and might make a move to the Gym or a Fitness class. Many out there might get out of shape or develop beer bellies as they would lose the fear of self-consciousness because of self-confinement and the fact that they wouldn’t get to see much people here and then.

Just like the way people are outdoor devoid or thrill hungry, Fitness fanatics may also reminisce their times out on a park at early morning, taking a casual stroll, or jogging or just occupying themselves with varied activities/Exercises around their desired surroundings. Similarly the prediction of a mass customer boom post pandemic times the entertainment franchises or other dormant franchises do, the same is expected with the Fitness Franchises.

In a way there’s a twice the amount of demand to be expected by Fitness Franchisors. Fitness enthusiasts could seek to satisfy themselves by indulging in productive, self-satisfying activities that would give them their desired results, provided if they put in the needed effort. By organizing a program or a recovery session after the post pandemic times, to aid and ease off the wounded spirits of the masses, they could progressively work to revive the Fitness Freak in them.

People might become more health conscious and understand the vitality and importance of incorporating exercise to ensure a healthy lifestyle over time. This pandemic might act as a beacon of realization of the essential elements that a healthy positive society really needs, people could further set new goals, new focus points from which their mind would get conditioned to strive on meaningful things. As for Franchisors they could set their eyes on their dormant prize that would yield them excellent results along with a tag of goodwill for acting out as Fitness influencers which would trigger the masses to act out subsequently.

Concluding with the topic we can see how necessary Fitness Franchises are for many, Fitness is this bridge which helps many individuals to walk their way to their goals, while some might have withheld and postponed such goals to the post pandemic era, or some are still working on it while ensuring that nothing gets in their way, or some have completely given up hope.

People are different right? You can’t say something that applies to every single person out there. But all we really do know is that the future is bright and when it arrives it would grace us with its shine and engulf us in its light of hope and happiness both for the people and for the Fitness Franchises and its loyal fanbases. Gyms would be crowded and driven with twice the enthusiasm, Fitness sessions would seem to be more joyous and fun, and those MMA sessions would be more focus driven and fun.

Why Is This The Right Time To Invest In The Fitness Business In India?
on May 16, 2022

Read More
The Top 10 Home Based Franchise Businesses in India
on Mar 31, 2022