Do you know India is the 2nd largest start-up ecosystem in the world?

Around 55,000+ start-ups are born each year, in which 3,200+ start-ups raise more than $60 Billion within the five years of their commencement. Since the past few years, India has been witnessing constant digital innovation which is easily accessible and has bestowed exuberant career opportunities to many ardent entrepreneurs, and they squeeze such opportunities with their tech-savvy skills. This has now led to the rise of 2-3 tech-based start-ups commencement every day in India. Many start-ups, including tech-based offer seizable employment opportunities that promote a 70% employment rate in India. As an entrepreneur is considered as the backbone of a country's economy, the growth of start-ups somehow endeavours to enhance the economy in the finest way possible. 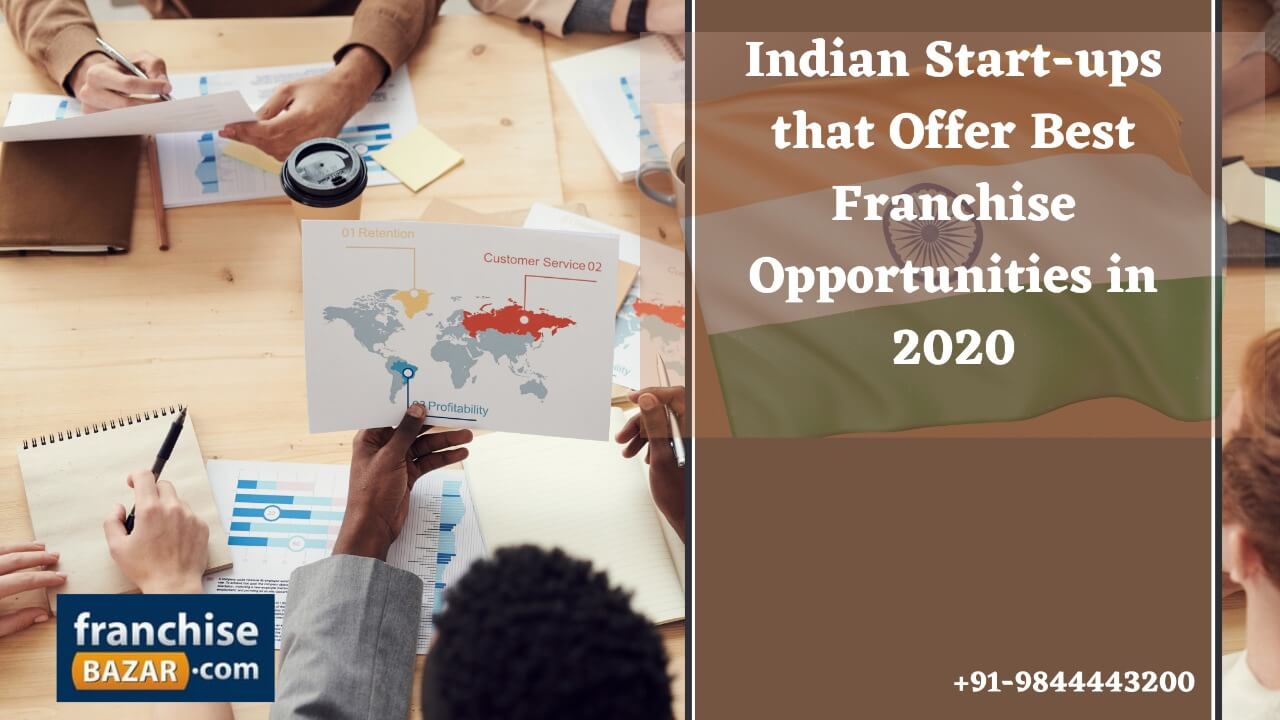 Many Indian start-ups began their journey and with a dedicated mindset which made them hold a firm grip on their platform and their expansion began to catch their note-worthy presence across the country. Below is the list of top 5 successful Indian start-ups that offer the best franchise opportunities in 2020.

Zomato was established in July 2008 in Delhi, exactly 12 years ago. The platform had a pioneering idea to utilize digitalization opportunities in India by accessing hundreds and thousands of restaurant menus and offering sizzler cuisine to the customers online. Today the start-up has become one of the largest augmenting platforms in not only India but in the global market as well, with remarkable brand awareness. At present Zomato has expanded in more than 24 countries including UAE, South Africa, New Zealand, UK, Qatar, Philippines, and Lanka, and the presence of the platform has been enlarging in more than 10,000 cities worldwide. Since India alone has 696 million digital users, Zomato alone makes it to capture the attention of 100 million users who all are more active online customers of Zomato. Since the pandemic began many platforms had to shut down, but the government permitted the continuance service of Zomato which helped the platform to grow swiftly and enhance its franchise opportunities across the country. Zomato offers restaurant partnership opportunities to the owner of restaurants, the company firstly scans the foods provided by the restaurant to ensure maximum safety and hygiene. After scanning the company, select the restaurant to conduct business and operations. The investment required to start a Zomato franchise lies between 30-35 lakhs and the space requirement is 2000-3000 sq ft.

CARS24 was launched in 2015 as a digital-based platform that enables the trading of used cars. It is one of the largest platforms that has its network expanding in more than 119 cities across India. The start-up commenced its platform intending to evolve the usage of old cars by utilizing them and selling online to the customers at an affordable price. with its 24/7 consistent and quality based service, the company’s unique idea was captivating enough to form 227 branches across India along with 4,000+ partners. The company has well-organized ethics and values that enable them to conduct and operate its business with persistence. The company sells the cars of top notable brands such as Maruti Suzuki, Tata, Toyota, Mahindra, Renault, Honda, Ford, Hyundai, Mercedes Benz, Audi, and many more. Apart from selling and buying cars, the company also offers loans to many people as per their eligibility criteria. To its franchise partner, the company serves exclusive marketing support along with low expenditures on various operations, the Return On Investment provided by the company is nearly 70% which attracts many franchises to squeeze this golden opportunity. The investment required to start the CARS24 franchise lies between 10-15 lakhs and the space requirement is 200-500 sq ft.

Delhivery start-up was inaugurated in 2011 in Gurugram with a mission to supply delivery services to its customers, the platform first step began with the delivery of only foods and flowers through its offline chain, since then the company started to emerge at a quick pace and in AUgust 2011 it evolved as from offline chain to logistics platform and starting executing its e-commerce services through its digital presence. In 2019 the company witnessed the profitable growth of 2800 cr, due to which at present Delhivery is eyeing for expansion in India, and in the next 18-24 months, it will be investing around 300 cr to enhance its expansion through the franchise business model. The company’s brand presence became significant since it received a huge investment from Softbank, which was nearly $413 million and it also won the Mahindra Transport Excellence Award in 2018, ET Start-up of the year award in 2019. The current expansion plan of Delhivery aims at growing 400-450 vehicles along with 150 truck fleets in India. At present Delhivery has 850+ delivery centers across 850+ cities along with 700+ partners in India which makes Delhivery one of the fastest-growing Indian logistics networks. To its franchise partners, Delhivery offers training to conduct business operations with innovative technology. The investment required to start the Delhivery franchise lies between 50,000 to 2 lakhs and the space requirement is 400-500 sq ft.

Pepperfry was commenced in November 2011 as online furniture and decor company, and in that first year when the company was still at its initial stage, it accumulated $5 million from Norwest Venture Partner. Later in 2014 the company funding raised from $5 million to $15 million and in 2018 the funding hit its peak and reached $30 million. Due to the distinctive business concept, strategic marketing accompanied by the highest funding, the company became India’s largest Furniture and Decor company. The company started enlarging in 28 cities with its more than 69 studies through its 1.2 lakhs listed products on its e-commerce website. The company now also offers its consultancy to the people through their consultant centers which assist its customers to make beneficial purchases. Through Pepperfry innovative investment strategy and consultation, the company operates nearly 20+ studies which are based on the FOFO model in many cities like Goa, Lucknow, Indore, Bangalore, Mysore, etc. The platform has its leading B2B presence with various partners including the HORECA, the leading B2B presence is the result of theri strategic tactics. The investment required to start the Pepperfry franchise lies between 30-40 lakhs and the space requirement is 1000-2000 sq ft.

Read More
Franchise Under One crore :FranchiseBazar
on Sep 22, 2021